Industry-leading new mobility and intelligent driving technology company, Human Horizons, have recently unveiled more details on the ultra-futuristic digital GT HiPhi Z. Redefining the traditional GT model, the HiPhi Z comes equipped with cutting edge technologies to create an unparalleled next-level driving experience. The vehicle itself looks, feels, and drives like a car from 20 years in the future, providing an insight into the future of human-like technology and transportation. “Designed and manufactured exclusively by Human Horizons, the HiPhi Z is a testament to the company’s dedication to technological advancement, sparing no expense in testing the boundaries of creation. Through rigorous testing and development, the HiPhi Z has retained more than 95% of its production intents revealed previously,” said Ding Lei, founder, CEO, and chairman of HiPhi.

On the exterior, the HiPhi Z is equipped with the world’s first wrap-around Star-Ring ISD light curtain on a passenger vehicle consisting of 4066 individually LEDs which can interact with passengers, drivers, and the world around it. The doors feature a smart ISD interactive system and ultra-wideband (UWB) wireless communication technology with 10cm-level positioning, allowing for automatic detection of people, keys, and other vehicles, resulting in a smart adjusted door opening in terms of both speed and angle. The active air grille shutters (AGS) connect with the rear spoiler and wing to automatically adjust vehicle drag and reduce lift for improved overall performance.

Inside the cabin is an ultra-futuristic spaceship-like digital setup featuring a ‘digital soul’ in the form of HiPhi Bot, a cutting-edge AI companion that can automatically adjust every aspect of the driving and passenger experience. From the soft-touch Plant-based Ultrasuede® material and flowing ambient panel lights to the 23-speaker Meridian audio system and racing bucket seats, the sensory experience of being inside a HiPhi Z with music playing and lights is completely unique. In addition to harnessing a combination of lighting, touch, sound, and fragrance, to create an immersive and comforting environment, HiPhi Bot is able to interact with passengers. It comes equipped with the world’s only vehicle-grade, 4-degrees of freedom (DOF), 8-direction infinitely adjustable, high-speed motion robotic arm which can move back and forth in place in less than a second and features control accuracy of up to 0.001mm, being able to perform a variety of delicate movements with barely a noise. 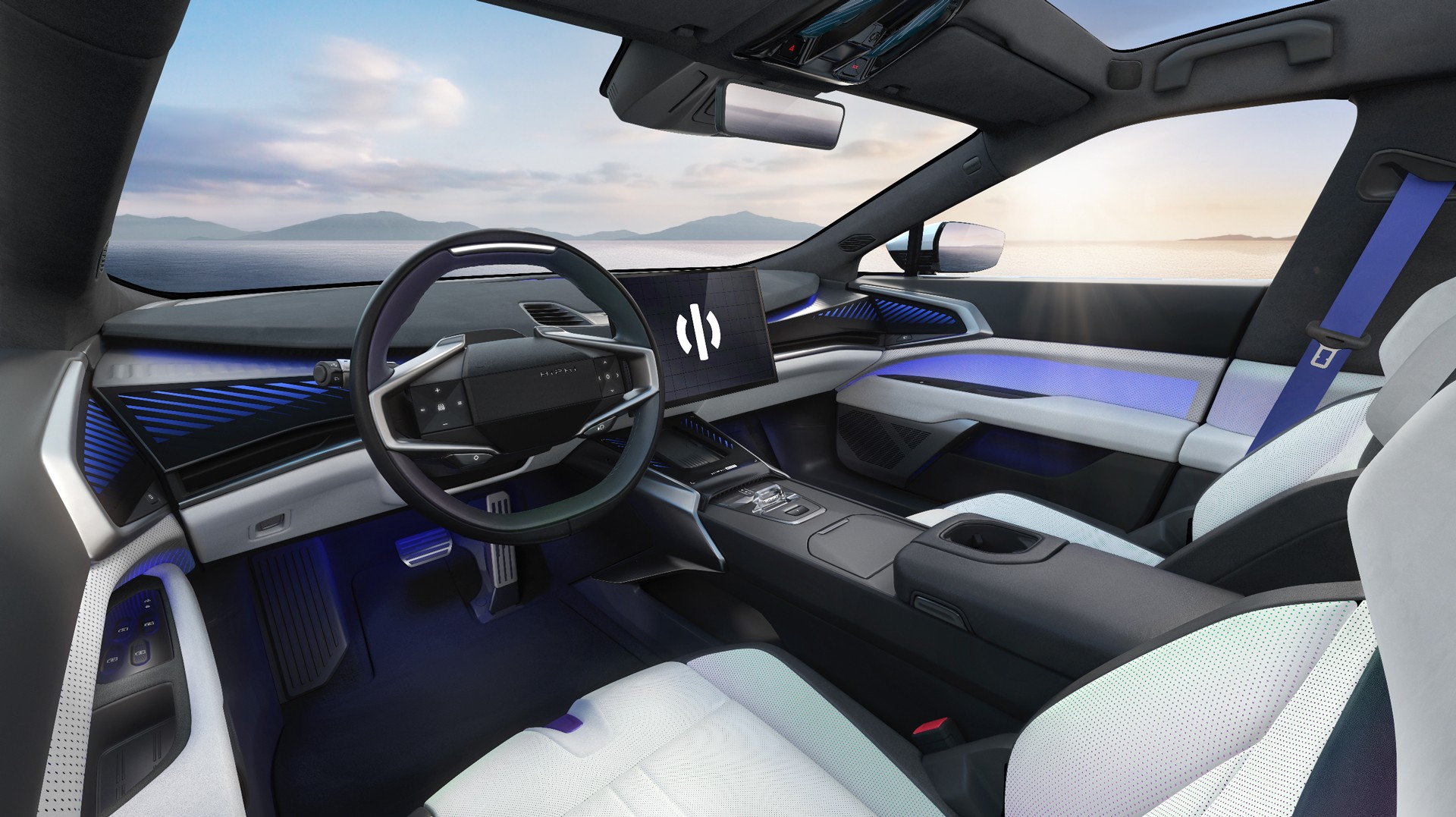 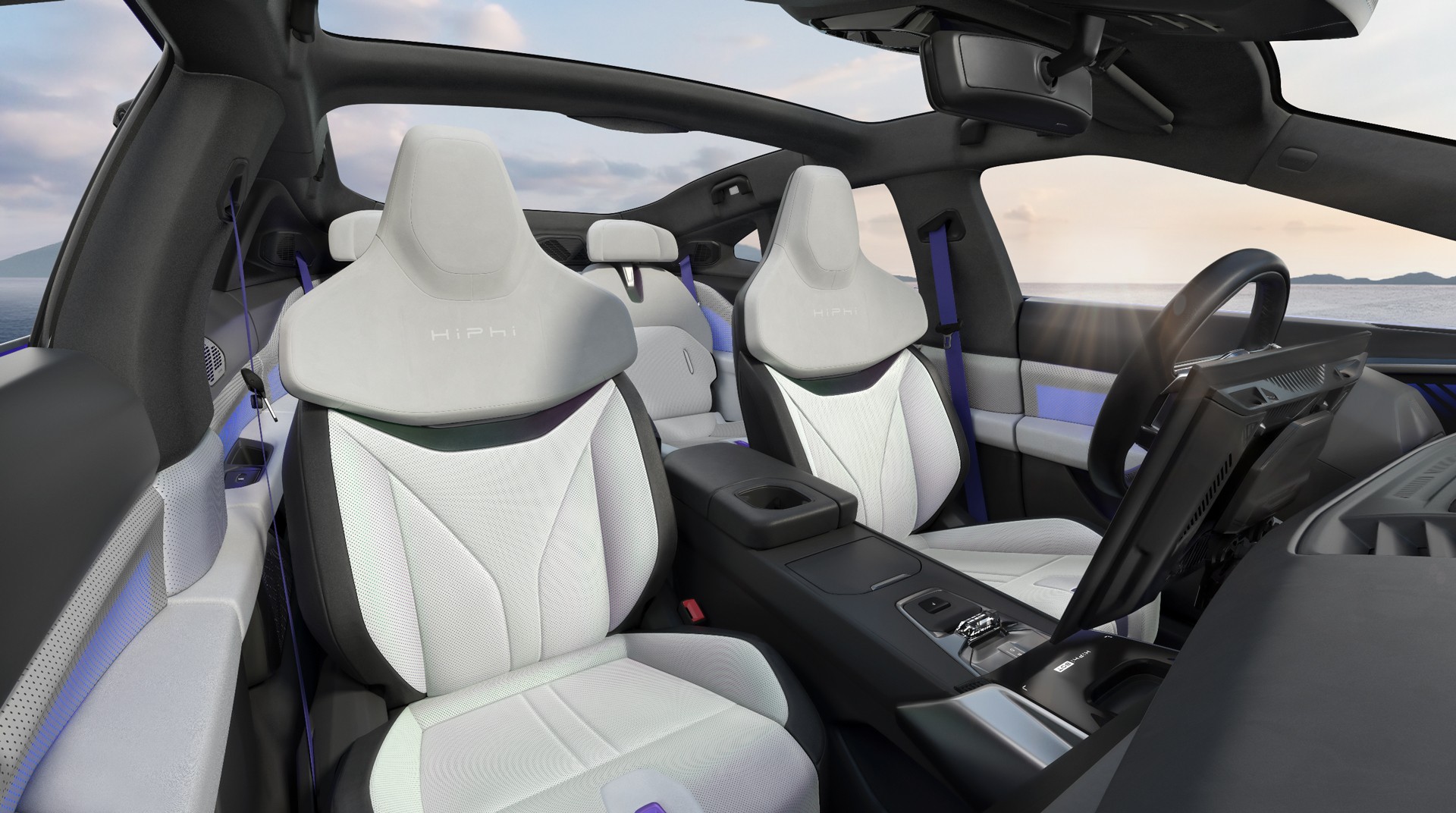 Racing to speeds of 100km/h in 3.8 seconds, the HiPhi Z adopts an all-aluminum double wishbone front suspension, five-link rear suspension, air suspension, and Continuous Damping Control (CDC) to continuously adjust the dynamic performance. The car comes with rear-wheel steering and an IVC vehicle dynamic control system that, despite being over 5m long, generates a steering angle of 13.2 degrees, allowing for a turning circle similar to that of a MINI Cooper. The HiPhi Z is equipped with a 120kWh high-performance battery pack using Cell to Pack (CTP) technology and cooling liquids to offer heat diffusion and prevent fires whilst providing up to 705 kilometers of battery life.

The HiPhi Z will be on sale for between USD 89,000-129,000, and in the lead-up to more announcement details, the HiPhi Z will be on display in Shenzhen from July 6, with plans to debut across 11 key major cities in order to give fans a sneak peek of the ultra-futuristic GT. Official rollout dates are scheduled to be announced at the Chengdu Auto Show in August, and interested users can book an opportunity to test drive the car through the HiPhi smartphone application.

HiPhi is a premium brand created by Human Horizons and enhanced by its users. HiPhi X is an EV with a lightweight hybrid aluminum-steel construction and sustainable vegan leathers and recyclable materials which add to the sustainable nature of Human Horizons' EV products.

Human Horizons is established for R&D in innovative and leading intelligent mobility technologies as well as the industrialization of future-oriented smart vehicles. Furthermore, Human Horizons builds smart transportation technologies and contributes to the development of smart cities, which will redefine human mobility.