HiPhi X, the first production model of Human Horizons, has won the Gold Award for Appearance Design in the China Patent Award. 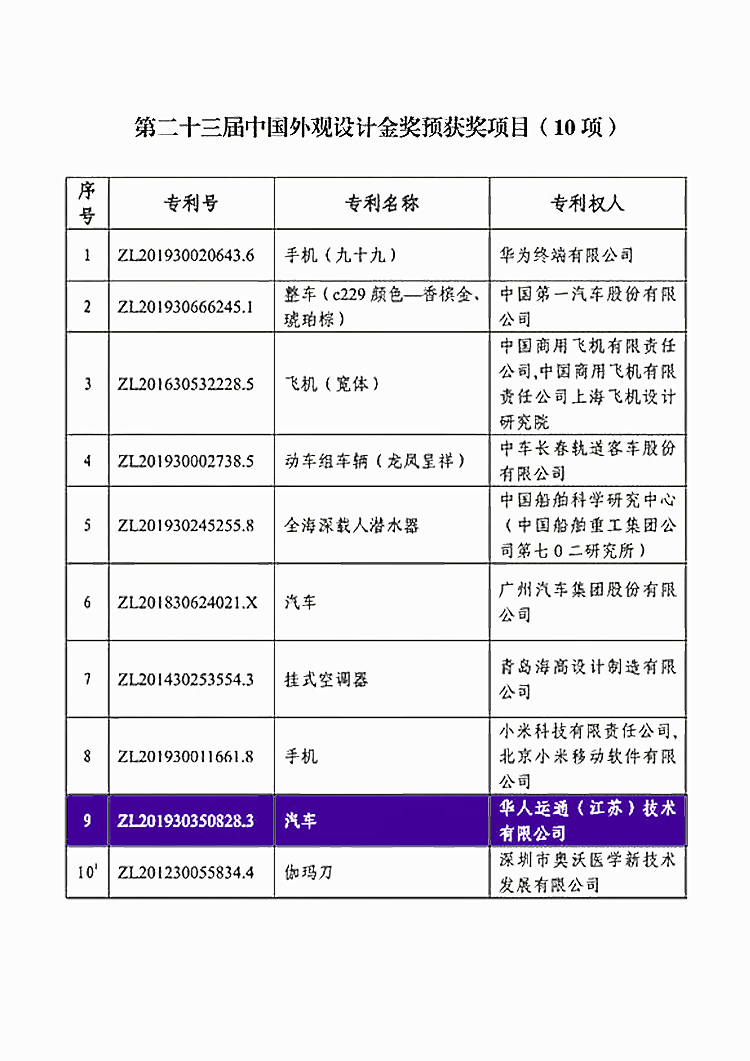 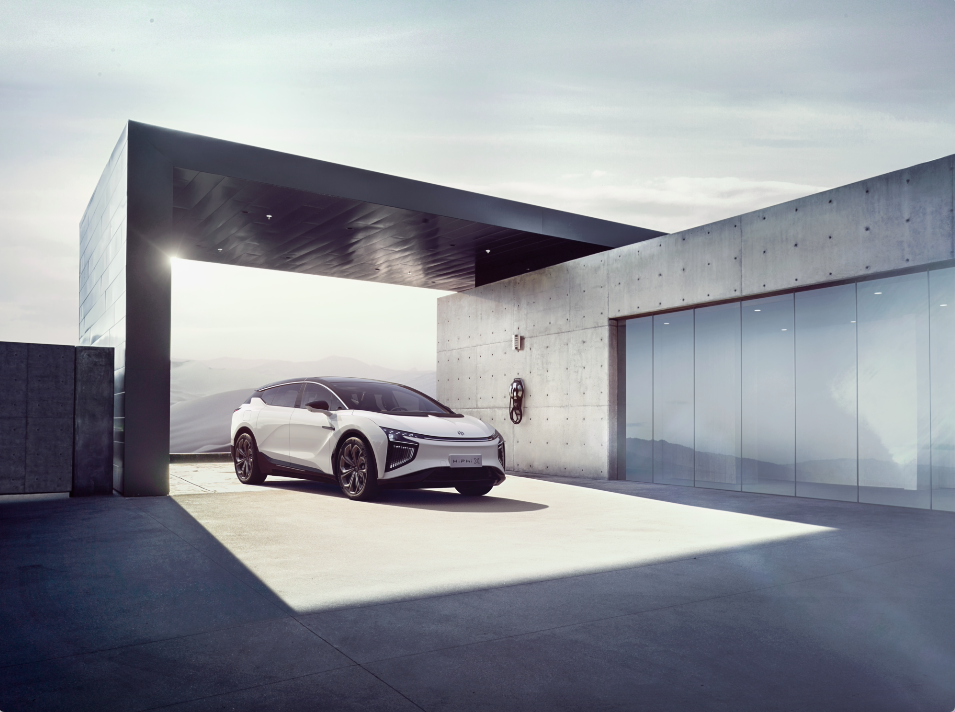 "Live to create," HiPhi has Won the Highest Award for Intellectual Property in China

The highest award for intellectual property in China is the China Patent Award. It is co-sponsored by the China National Intellectual Property Administration (CNIPA) and the World Intellectual Property Organization (WIPO). Established in 1989, the award is the only national award in China that specifically rewards inventions that have been granted patent rights. It represents the highest level of China's independent innovation and has great international influence. The coveted nomination for the China Design Gold Award is rare, limited to 10 selections nationwide.

The high standards for the selection of the Patent Award include patent quality, design uniqueness, aesthetics, expression, ergonomics, structural rationality, safety and reliability, patent protection measures and effects, social benefits and development prospects, and awards for the design.

The Gold Award was won for the appearance patent of Human Horizons’ first model, HiPhi X. It embodies the innovative, rigorous, and persistent craftsman spirit of its founding team members, as well as the wisdom and hard work of the design and engineering teams involved in its creation and design. The HiPhi design team achieved the goals of HiPhi X from the drawing board concept to mass production - engineering mass production delivery. Turning the “impossible” into “possible,” the HiPhi team has created a miracle from scratch in China’s auto industry. 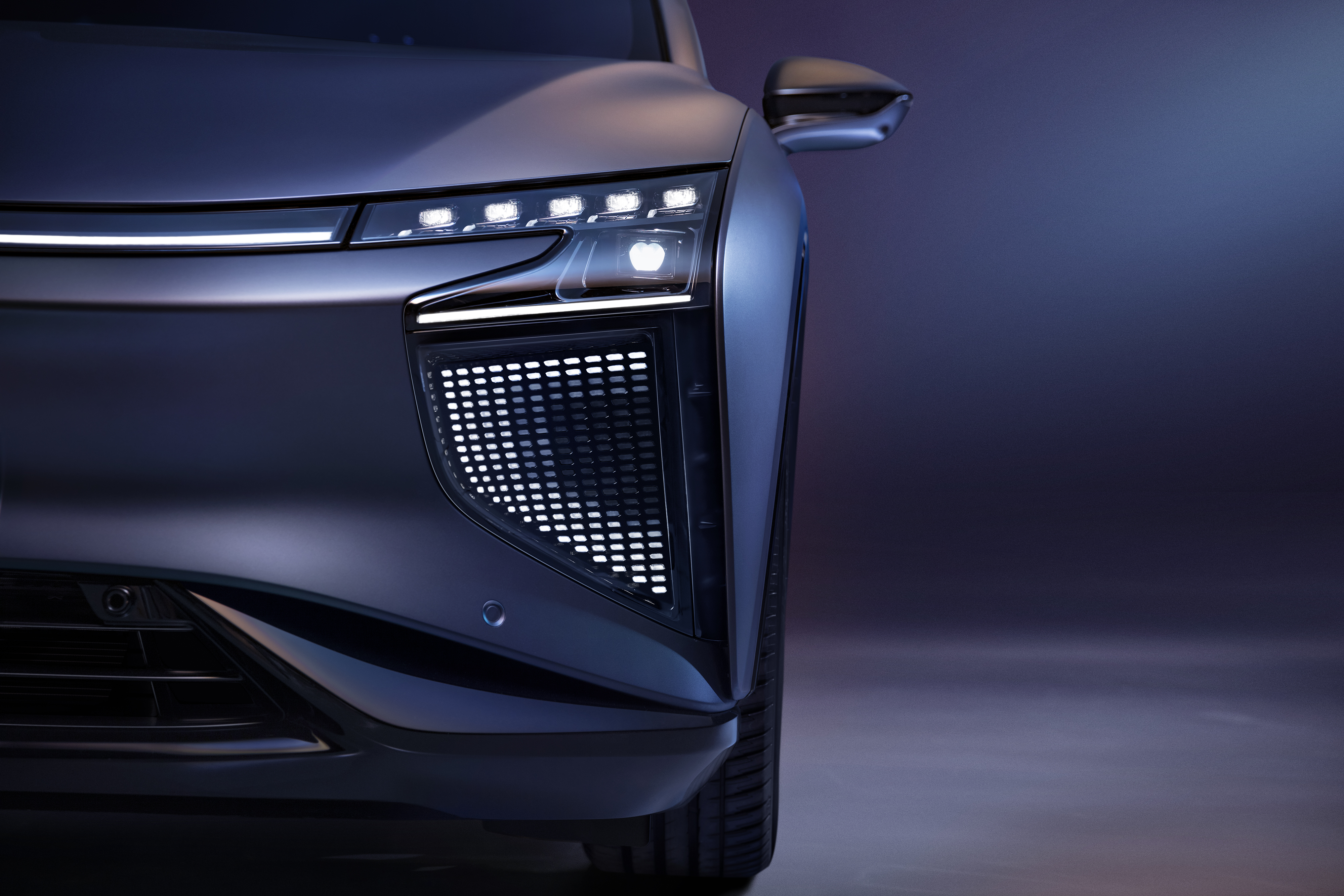 The exterior design of HiPhi X reflects the unique development concept of "design defined by scenarios, vehicle defined by software, and value defined by co-creation," creating a future-proofed mobility experience for users. 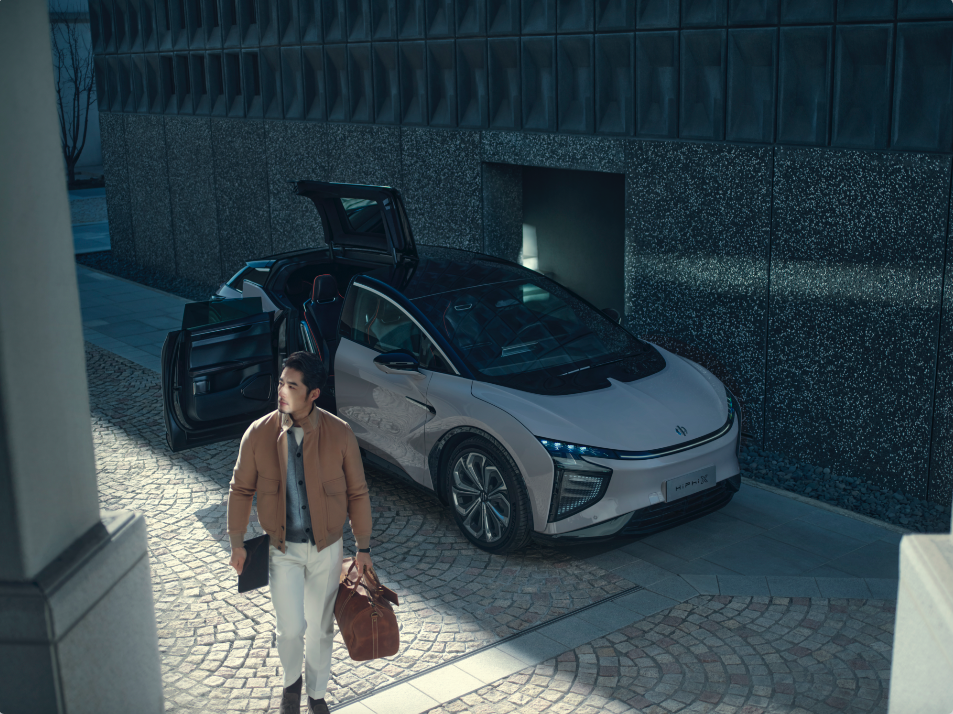 Starting from the actual needs of user scenarios, HiPhi X fully leverages the advantages of the electrified body design of the E-proportion, perfectly blending supercar performance with the extravagant space of a large SUV, creating a new breed of "supercar SUV", which is in the limelight wherever it goes.

The front of the HiPhi X SUV creates a unique 8-quadrant layout of the HiPhi logo. The nose line of the hood and the front bumper form an X-shape. The four dimensions of the X-shape represent four concepts of practicality, innovation, science, and art. The PML (programmable matrix light) runs through the car front horizontally, integrating the Western pursuit of lighting technology (lighting mode) and the Eastern emphasis on etiquette interactions (interactive function). The I-line at the center represents the present and the future, with the upper end of the I-line breaking through the hatch and extending backward, echoing the design of the rear of the car, expressing the constant pursuit of technological limits and HiPhi X's ability to make breakthroughs and to evolve. 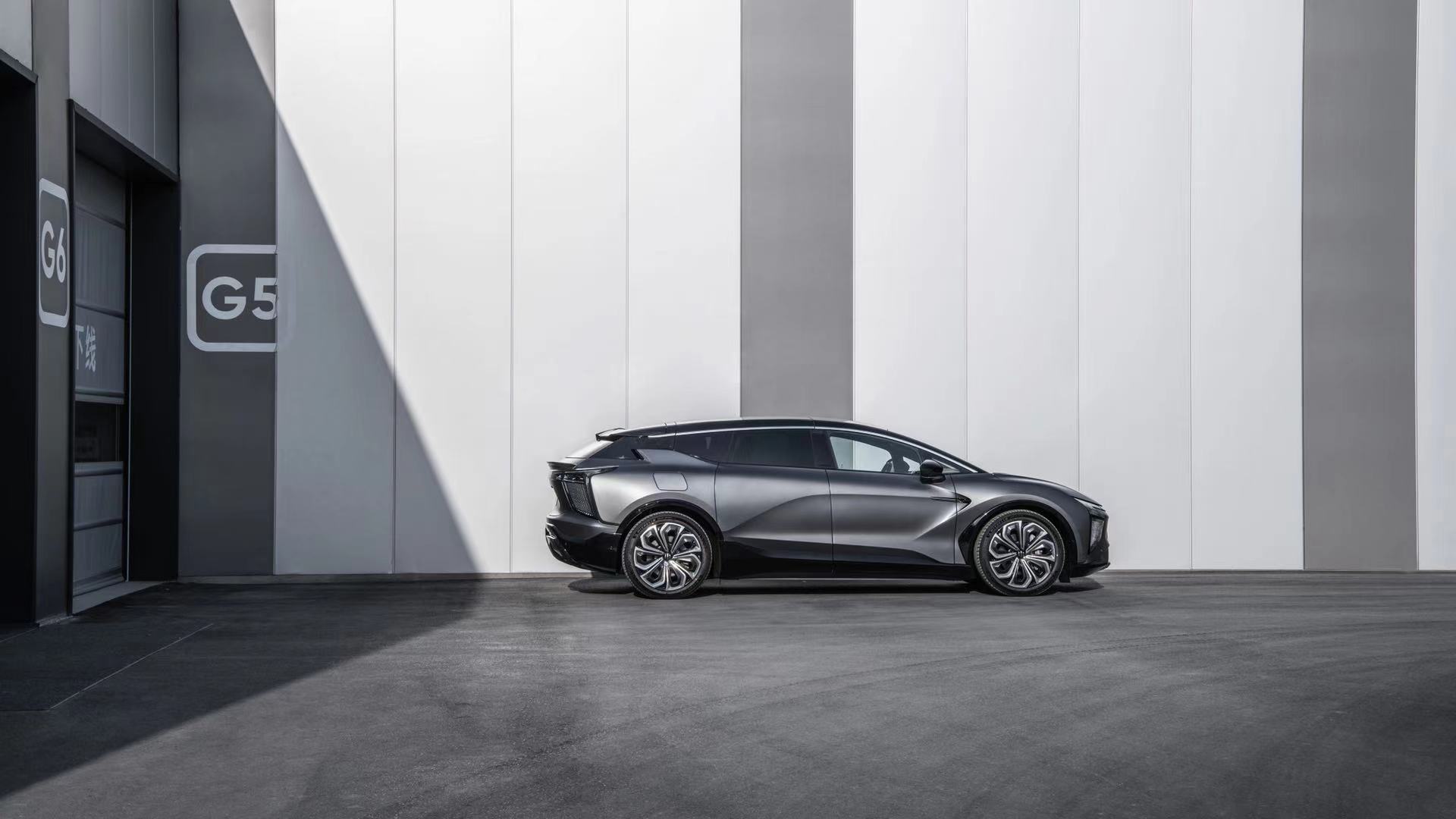 HiPhi X accelerates from 0 to 100 km/h in just 3.9 seconds. The long-range version has a range of up to 650 km under CLTC conditions on a single charge. These features meet the needs of users in urban, inter-city, highway, and other scenarios. HiPhi X is equipped with several globally-advanced technologies such as HiPhi X NT doors, PML programmable intelligent headlights, and ISD intelligent interactive lights, as well as an active rear-wheel steering system enabling an angle of up to 10 degrees. The fully-evolved future-proofed hardware features HiPhi Pilot -intelligent driving assistance, HiPhiGo - emotional intelligent mobility partner, and other intelligent mobility technologies with a human touch, creating an unprecedented TECHLUXE® experience for users. 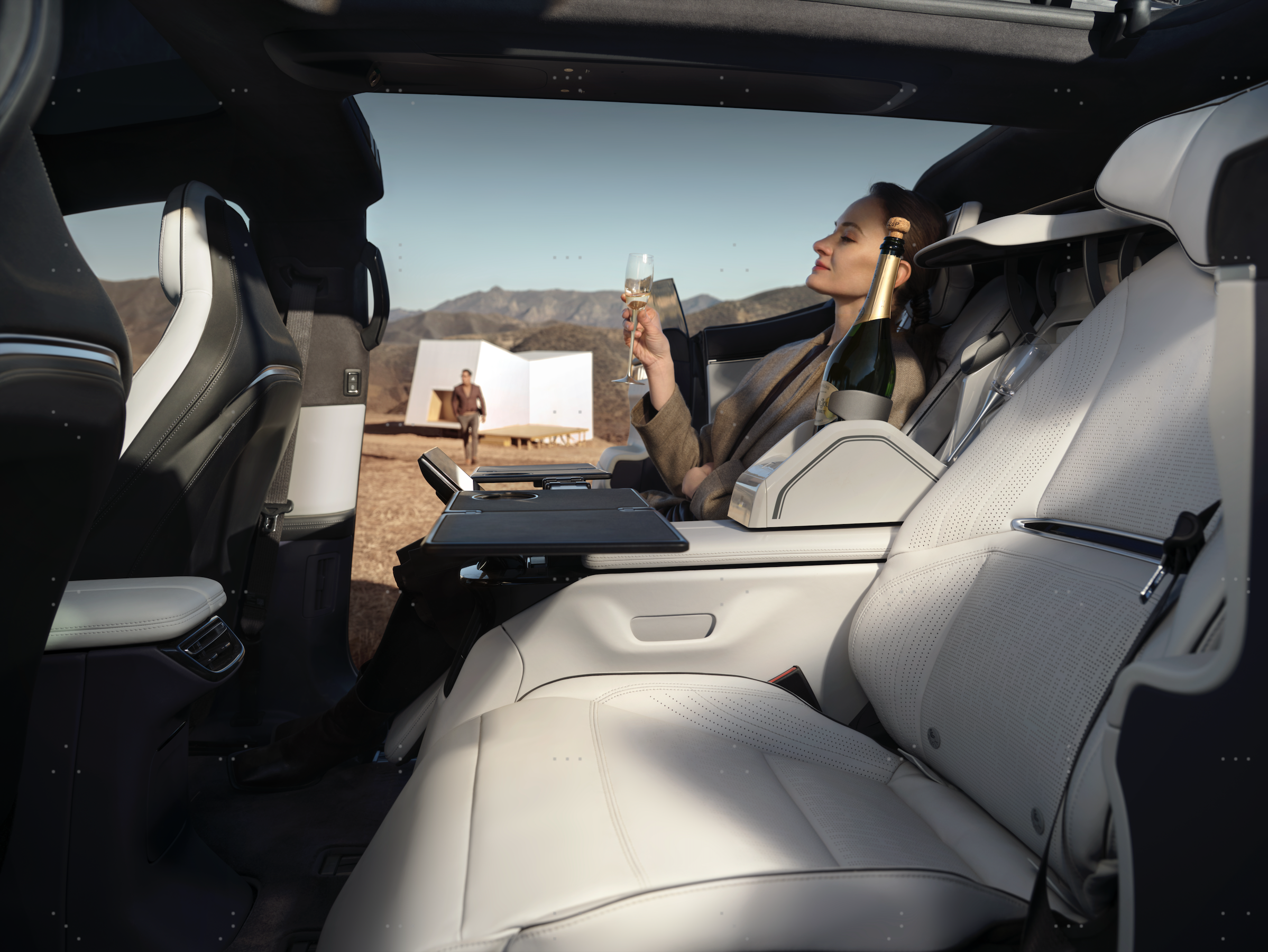 (Image: The sales volume of HiPhi X has continued to lead the luxury electric vehicle market of more than ¥500,000.)

Since its official delivery in May 2021, HiPhi X has continued to lead sales volume in the luxury EV market of more than ¥500,000, building an excellent market and user reputation. It has topped the sales chart of luxury EV of more than ¥500,000 in the second half of 2021 and has maintained strong momentum in 2022. In the first quarter of this year, it continued to top the segment sales chart, with a quarterly market share of 28%.